By Rory Butler For Mailonline

In a bizarre Facebook post, which has been subsequently removed from his profile page on the social media platform, Bolsonaro cited an obscure guide about sex education to question the WHO’s authority on coronavirus.

He used this and other tenuous references to make his case the global agency is in no position to direct him on the best way to curb the spread of COVID-19.

The Brazilian President has been in the public eye constantly for his criticism of social distancing and isolation measures prescribed by the WHO as an effective means to limit the contagion. 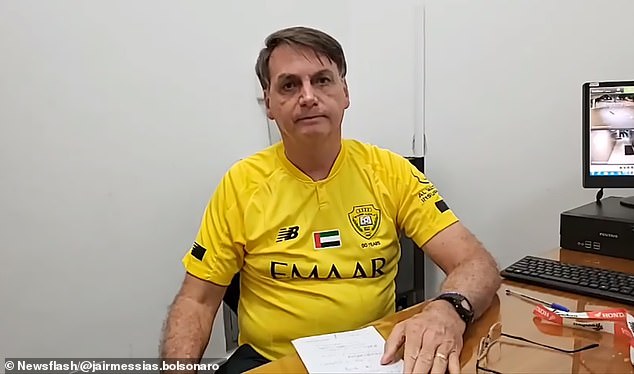 Brazilian President Jair Bolsonaro (pictured) has repeatedly attacked the WHO for its coronavirus directives, saying Director-General Tedros Ghebreyesus ‘is not a doctor’

On his official Facebook page, Bolsonaro wrote: ‘This is the World Health Organization (WHO) who many say I must follow in the coronavirus case.

‘Expressing their needs and desire, for example, in the context of “playing doctor”. Children have sexual feelings in their early infancy.’

Bolsonaro added in his Facebook post young people aged nine to 12 ‘have their first sexual experience,’ according to his reading of WHO guidance. 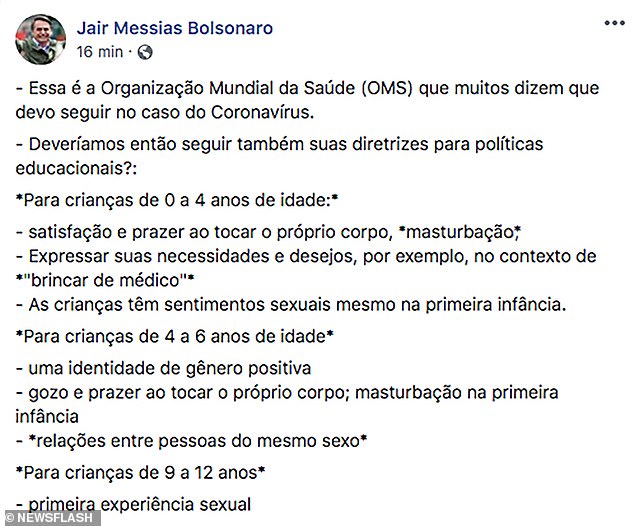 Bolsonaro was in fact citing a 2010 guide by the Federal Centre for Health Education with the European arm of the WHO.

The text Bolsonaro referenced is designed to help parents to educate their children who between two and four are becoming curious about their own bodies and noticing their difference to others.

As they are curious they begin to touch their sexual organs and want to show them to other children or adults, according to the WHO.

The guide does not however tell parents they should encourage their children, but rather speak to them about this phase in their young lives, reassuring them that ‘liking physical contact is common’ and normal.

President Bolsonaro has repeatedly attacked the WHO for its coronavirus directives, saying Director-General Tedros Ghebreyesus ‘is not a doctor’, adding: ‘It’s like if the president of Caixa (a Brazilian bank) weren’t from economics’.

Ghebreyesus is a microbiologist and internationally recognised malaria researcher who served as Minister of Health of Ethiopia from 2005 to 2012.

The country of Brazil has 79,685 confirmed cases of COVID-19 and 5,513 deaths to date, according to research from Johns Hopkins University.